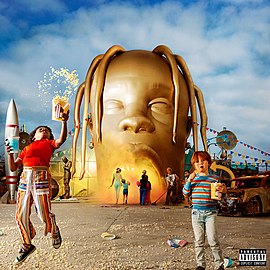 Travis Scott's latest album, "Astroworld", was released on Aug. 30, 2018. "Astroworld" was his third album to be released.

At the time it was released, it was the second highest opening week for an album in 2018.

One of our favorite tracks is “Sickomode.” What makes the song good is the beat that makes you feel hyped, happy, and will make you want to, “Fold the dishes, and brush your toes,” as one Seymour Rogers student, Rolando Anchando, put it. We agree, the track goes hard.

Some of the interesting features are Frank Ocean, Drake, and The Weeknd.

Scott’s “Astroworld” Wish You Were Here Tour will be traveling across the states, starting in Baltimore, Md. Nov. 8, and finishing in Portland, Ore. on Dec. 22. The nearest show for those in the LK will be at the Pepsi Center in Denver, Colo. on Dec. 12. Tickets are available for purchase on Scott’s website located here: https://travisscott.com/tour