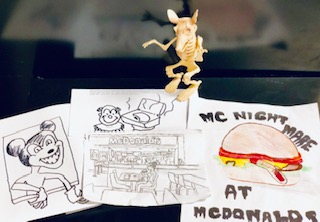 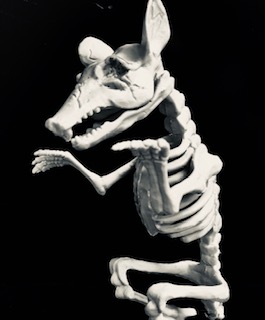 Three Horrific Tales Selected from a Gambit of Students' Works Dwell Here, Read If You Dare

A Trash Bag, A Girl, And A Hole In The Ground

One day, Claire could feel the tension in the air, almost

strong enough to make her gasp

for air. Although she knew something was different, she was

unsure whether it was large

enough to notice or so small it was almost transparent. It was

the last day of school and she

couldn’t have been happier, she’d always dreaded the awful

place. She had never really fit in or

had the best grades, however she had managed to scrape by.

When she was on her way to

themselves. She tends to avoid

them but today she saw something strange. They turned in the

sure nobody had seen them. While walking past, Claire heard

the wretched cries of a young girl.

As opposed to calling someone she decided she would come by

after school to check it out.

She went through the day like any other, the bullying, the

failed tests, everything was just

how it was any other day. ​Although ​towards the end of the day

she noticed one of the popular

girls were missing. She was still paranoid about what she heard

on the way to school. Claire

thought about telling someone, and then decided it would be too

risky. She couldn’t risk it. She

decided she would mind her own business until the bell rang.

Although she had to practically

drag herself through every second of the day, she was finally

done with school. Two months of a

bully free, worry free life. Or so she thought.

find in the alleyway. Once she

arrived she had to make sure that there was nobody watching

her and that the coast was clear.

It was.​ In contrast​, she got about halfway down the alley and

into the trees and shrubbery. The second she stepped towards

the bushes Claire could smell

something horrid, something almost traumatizing. She moved

some of the fallen branches and

dead shrubs to find a trash bag, lots of them. Next to some of

the bags were holes, so deep they

could almost be for… bodies. Claire heard the maniacal yet girly

laughs of a group of teens

behind her, she had to hide. She decided to hide in a nearby

bush, but Claire had fallen and

landed with a hard thud. She was knocked unconscious for a

few minutes. When Claire had

finally came to she realized she was in a hole. Paralyzed with

fear she had not heard any of the

girls nearby so she waited until she calmed down and crawled

out of the hole. Once Claire

finally managed to climb out she didn't see any other holes, trash bags, or any signs that

anyone had been there.

Right then she woke up, she was only dreaming. Claire

was gasping for air and weeping

in fear at the same time. She got up, got dressed, and walked

out the door to head to school.

However​ about halfway there she was knocked unconscious.

Once Claire had woken up she

size, almost snug enough to be the

same hole she had fallen into during her dream. She came to

only to realize she could hear the

laughs of girls. These were the same people she had heard in

her dream. She stood up only to

be struck over the back with what felt like a metal pole. She was

then stabbed in the side

multiple times. She let out the most agonizing scream even she

had ever heard. She was

shouldn’t have been humanly

possible. Then she was buried alive and left to die. It didn’t

matter whether she bled out or the

air was slowly drained from her almost lifeless body, she was

going to die either way. Which she

did, 7 years ago. And still hasn’t been found, and ​for this reason,​

the town is now a ghost town.

Jesse walked into McDonalds. She noticed something out of place but this didn’t stop her from ordering. When she went up to the counter and noticed it wasn’t the usual teenager who took her order. Instead it was that friendly clown, Ronald McDonald. This clown had a big smile spread across his face. The smile was a creepy smile, not the usual nice smile. The clown asked Jesse “What would you like to order,” in an evil, sinister voice. Jesse was freaked out but still hungry. She replied, “I’ll take an Egg McMuffin.” She paid and noticed there was another customer near her. This customer had an identical face to the cashier. Jesse moved away and grabbed her receipt. As she glanced at it, she saw “behind you” written on it. She turned around and was bludgeoned on the head by something, unconscious.

Many hours passed and Jesse finally woke up. She was on the kitchen floor in a back area at McDonalds. Ronald came up to her and with his sinister voice he said, “You finally woke up.” Paralyzed with fear Jesse, didn’t move. Ronald began to talk again. “For years, people have enjoyed our food. But, they have no idea what they are eating.” Jesse started to make a run for it, but there were clowns everywhere, they trapped her. 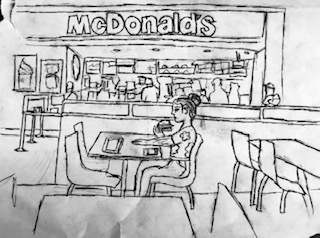 The clowns grabbed Jesse and took her to a meat grinder. She tried to wiggle out but couldn’t. The clowns were going to start with her feet. She could hear the sound of the grinder. Suddenly Jesse felt pain. There was blood everywhere. The clowns proceeded until they got to her head. Ronald grabbed her head by the hair. He grabbed a giant knife and then ….

Jesse woke up, it had all been a bad dream. She was sweating and her heart was racing with fright. Even so, she was pretty hungry. She headed to McDonalds. This time everything was normal. She ordered a Sausage McMuffin. She sat down to eat it. She took a bite and there was a large chunk of something in the meat. She spit it out. Upon close examination, she realized it was part of a finger with a pink-painted-fingernail…. the same color her nails were. 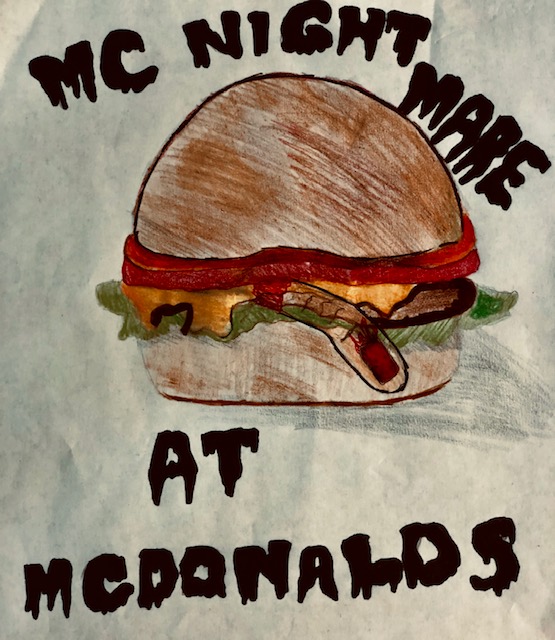 by Manuel Hernandez and Lindsey Perez

Raven was visiting Disney World when she decided to buy a souvenir at the gift shop. As she walked in, the lights started to flicker. Outside the bright blue sky faded to midnight darkness. Raven spotted a stuffed-life-size Mickey Mouse and made the decision to go purchase it. While she was walking she looked at it again to admire it but when she did, Mickey-Mouse looked different, too different. Suddenly, with a quiet pop, the lights went out altogether. Raven stumbled around trying to get to the door when she heard Mickey-Mouse’s friendly voice laughing.

Raven stopped and looked around the store. She glanced to her right and saw the exit, Raven heard Mickey's voice now a painful shrill, as he beckoned closer. Raven felt him drawing nearer, outlined with a shadow of the darkness. Raven was paralyzed with fear, her eyes widened, her cheeks dampened with silent tears

Furthermore, Raven heard the hollow sound of a drum banging as she slowly drifted from consciousness. Raven ‘woke inside a circular chamber, chained to the floor. Raven tried to scream for help, however much to her dismay, the silence that met her was louder than ever. In the distance she heard a Jack-in-the-box being wound up, the song rising to a crescendo, then stopping as it foreboding what would happen next. Finally, Mickey devoured Raven. Her last breath was that of a piercing scream. 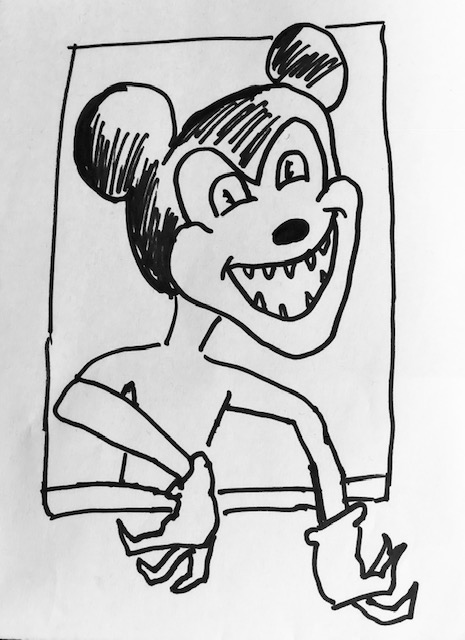