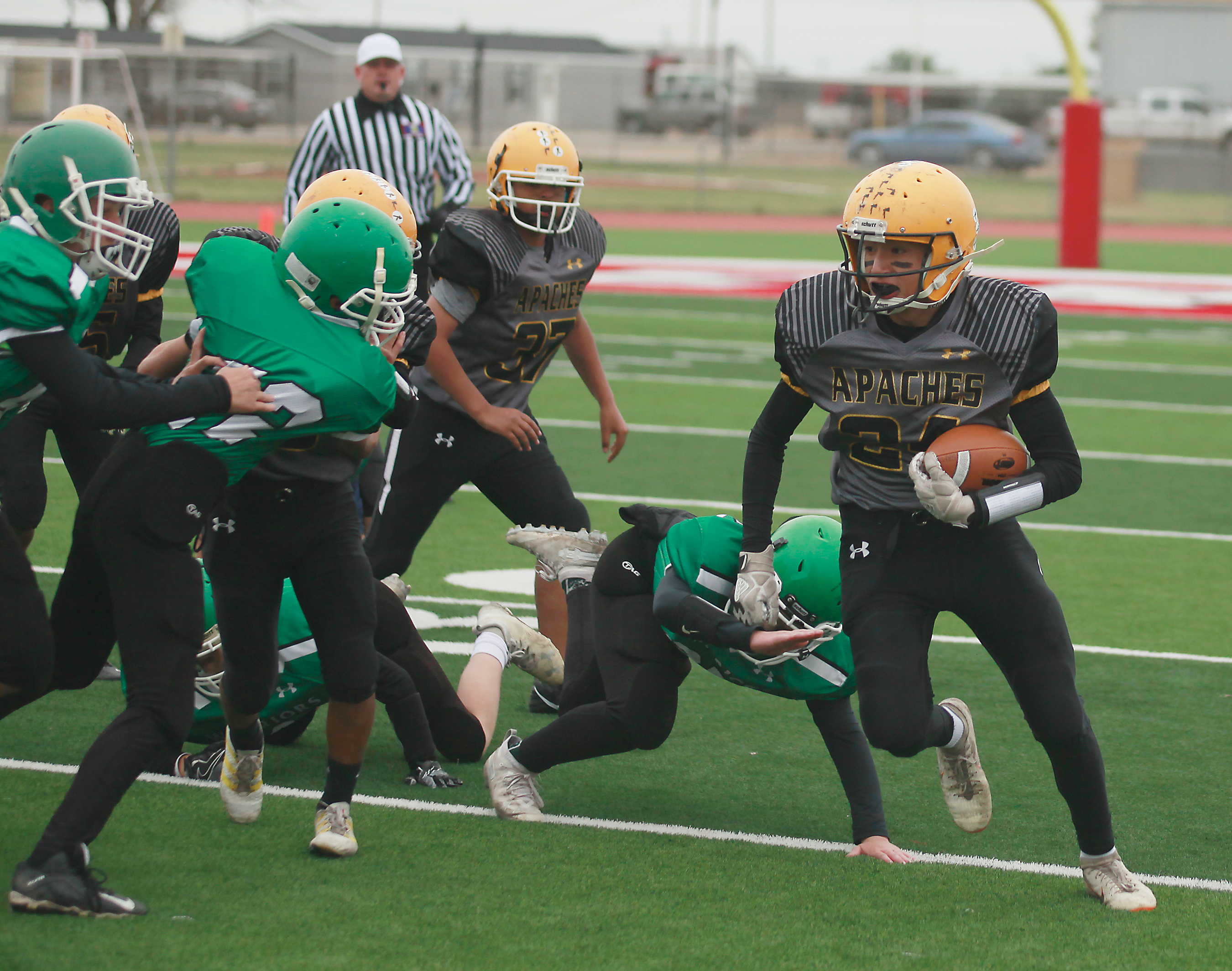 By EARL WATT
• Leader & Times
Alan Vazquez carried the load for the Seymour Rogers Apaches early, but he suffered an injury in the second quarter that dimmed the hopes of a victory against the Eisenhower Warriors in the annual Crosstown Clash.
But the Apaches stepped up with Haret Huerta and George Tajeda in the backfield, and a key pass reception by Javoni Garcia helped the Apaches rally in the second half for a 26-18 win.
The Apaches scored first on the opening drive of the game with a fourth down touchdown run by Alan Vazquez, but they failed to get the two-point conversion, and they led 6-0.
But the Warriors came right back and answered with a touchdown to tie the game 6-6.
Vazquez broke free on a long run to set up a first-and-goal for the Apaches, but he was injured on the play and did not return.
The Apaches failed to gain the final four yards, and the Warriors were able to get out of their own end with huge runs from Camron Heronemus.
The Warriors took a 12-6 lead, but the Apaches came back with Haret Huerta at quarterback to tie the game, 12-12.
But the Warriors again found the end zone with a solid passing drive from Brooks Kappleman, and the Warriors jumped ahead 18-12.
Huerta continued to lead the Apache offense down the field to answer, and the Apaches tied the game 18-18.
The Warriors drove into Apache territory on their next drive, but a holding penalty slowed their momentum, and the Apaches were able to hold the Warriors on a fourth down attempt.
Huerta and the Apaches marched down the field including a 26-yard reception by Garcia, and Huerta was able to plunge over the goal line for a 24-18 lead. The Apaches ran a reverse for the two-point conversion, and Seymour Rogers led 26-18.
But the Warriors moved the ball down to the Apache 30-yard line with less than a minute to play when an incomplete pass led to a fourth-and-long, and the Apaches were able to get a sack to end the game and secure the 26-18 Apache win.
Seymour Rogers started 0-4 with all losses within a touchdown, but they won their last three games of the season.
Apache head coach Kaelin Shuck said his team was able to rally after Vazquez was injured.
“We get to the 4 yard line and we don’t punch it in,” he said on the play that ended the seventh grade season for Vazquez. “We talked to them at half and told them they would have to step up. We had the individuals to do it, but we leaned on him. This team drew together with Alan going out.”
Huerta was a big part as well as his lead blockers paving a way to huge runs.
“Huerta stepped up,” Shuck said. “He read well, had great blocking. I couldn’t be more proud of the guys blocking on the perimeter to spring him.”
And the game always carried more weight being the Crosstown Clash.
“It was huge,” Shuck said of the win. “This game means a lot in this town. We had emotions going. This team next year might be competing for the WAC.”
The Apaches didn’t try to get too fancy in the second half with Vazquez on the sideline. After finding a small opening in the Warrior defense, Shuck said they continued to exploit it.
“We found some holes in the defense,” he said. “We saw some gaps and went at it. I think we ran the same play 12 times in the second half. We had a hot hand and stuck with it.”
After the slow start to the season, Shuck said he expected the team to continue to improve as eight graders next year, and that they also developed a love for the game of football.
“It’s so special,” Shuck said. “On our team, we had about two or three play Kids Inc. They were mostly soccer players, but today they became football players. They are just scatching the surface of what they can accomplish.”
Tweet