These numbers are pretty staggering, and many who have suffered from bullying continue to keep things bottled in, 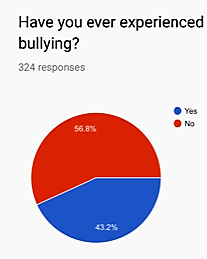 This is one of the biggest issues for victims of bullying, not opening up, not finding someone that they can speak to, someone they can confide.

“Growing up, bullying became a normal thing I went through on a daily basis, and I thought there was no point in even trying to report it,” a student responded in an anonymous schoolwide survey conducted by Apache Weekly.

This statement shows that not enough is being done to take a stand in bullying for some students. Many kids feel that opening up would just be a waste of time and a lot of students don't want to be looked at differently than any other student, or suffer the embarrassment that may follow.

If a student does experience bullying, there is a process at SRMS to solve the issue.

“First we figure out if they know who it is,” Student Counselor at SRMS, Wendell Bard said. “A lot of times they don’t want to say the name 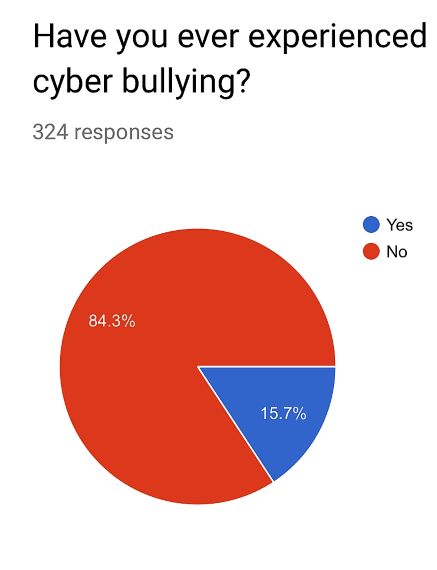 because they’re afraid of the bully, they’re afraid if we do something they’ll be retaliated against. We try to make sure that it’s looked at as a very important issue, that if they come to me or any adult, we’re going to take action, confront the bully, and get the student the help and support they need.”

A survey was conducted by Apache Weekly here at Seymour Rogers Middle School and it has provided us with some insight into bullying here at SRMS.

conducted last week. This first graph shows that out of 324 student responses, 43.2% of students have experienced bullying in some capacity. In graph two we see

out of 300 responses how students reacted to bullying. In the next graph, it shows that 15.7%

of student respondents reported experiencing cyber-bullying. In the following graph it shows that 68% of respondents see physical bullying as the most harmful, and below that 16% of students admit to being the bully themselves at some point. The final graph shows the percentage of those who had been bullies that later regretted their actions,

and if it is compared to one above,

it can be seen that only about one percent 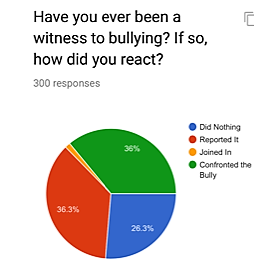 of those admit to not regretting their actions.

Those who may be going through a difficult time must know, that here at SRMS bullying is going to be taken seriously, and doors are open to all.

Lindsey Sill, a social worker at SRMS, provides many services to students.

“I work with kids and families,” Sill said. “Advocating for both their educational rights and also making sure they have what they need to be successful. I do therapeutic interventions and  help get stuff that they might need from community resources like water, food, things like that.”

As a social worker Sill sees between 20-25 students a week and discusses bullying with many of them. One of the issues she sees is that many students are afraid to seek help.

“I think it's really scary for some,” Sill said. “It’s hard when you don't really know if there's anything you can do to keep yourself safe, whether its verbally or physically when it comes to bullying. I think in big schools it can be really difficult because there's always that fear, if I say something it's gonna get worse, that kind of blowback situation."

Students need to know that if they don’t seek help it’s difficult to put a stop to it.

“Things don't change if we don't do something different,” Sill said.

“So, there is a 100% chance that it's going to continue if you don't do something, if you want it to stop or

change, you have to tell someone." 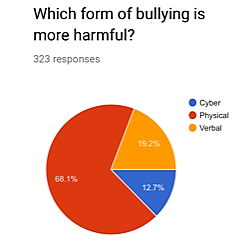 A new curriculum is being implemented this year to further provide education on bullying and its effects on victims.

“We are getting ready to implement some new bullying resources,” Vice Principal Dedre Schneider said. “The board approved the curriculum at their last meeting, and I will be meeting with our teachers. We will be coming up with a new plan on how to do some anti-bullying work in different classrooms throughout the year.”

Students who may be a victim of bullying, you are not alone at Seymour Rogers. Student counselor Wendell Bard, social worker Lindsey Sill, assistant principal Dedre Schneider, and all staff at SRMS are here to help, and their doors are always open.

“It really happens in some fashion to everybody,” Sill said. “You are not alone, and I think that's something that can be really empowering because I think a big part of bullying makes that person feel super isolated, like it’s only happening to them, but I just want to say, it happens to everybody.” 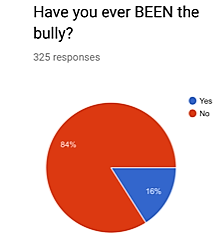 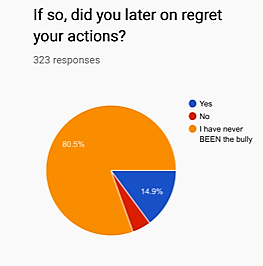