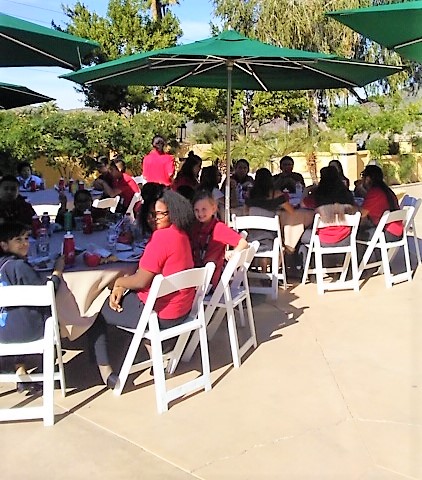 Students enjoy their meal outside of the Pointe Hilton Tapatio Resort in Phoenix, Ariz.

On Friday students began to compete at 8:00 a.m. FCCLA members  who were not competing were in their rooms studying and practicing for their competition and presentations. Later that night, students had opening ceremonies where there was a special speaker, sadly Seymour Rogers was released early from the opening ceremony to go eat and didn’t get to hear much from that guest speaker.

On the second day of competition, several students began competing from 8 a.m. to 8 p.m., and beyond. Students who had taken a test or were not competing that day were able to go swimming, attend the workshop, or the gift shop. After knowledge bowl, which was the last group to compete that night, FCCLA advisor Walters was very very proud, “I’m so excited,” Walters said. “They made history as the first group of middle school students to achieve this nationwide and it was a wonderful experience.” Seymour Rogers’ FCCLA Knowledge Bowlers, earned a spot at nationals in Anaheim, Calif. FCCLA members attended the closing ceremony at 8:30 p.m. which lasted through 10:35 p.m. following knowledge bowl. That’s when Seymour Rogers’ first, second, and third place finishers were announced and received their awards. These FCCLA students made not just each other extremely proud, but their advisor who prepared them for all of this, Dr. Yanique Walters. Dr.Walters said her students went “above and beyond to meet her expectations” and were studying 20 hours, if not more, to meet these expectations.

Left to Right: Rosa Gutierrez, Beatrice Veloz, Jazlin Catalan, Luz Tercero Vargas, and Yessica Esparza, the Seymour Rogers FCCLA Knowledge Bowl team competes in Phoenix. These girls have punched their ticket to nationals in Anaheim, Calif. where they will be competing from June, 30- July, 4.

All members that went on the trip were to be outside of their rooms by 4:00 am to load all of their stuff onto the bus. Seymour Rogers and Liberal High School, who rode together, ended up leaving Phoenix, Ariz. around 5 a.m. Overall, students say they had an amazing time, and a safe fun trip. 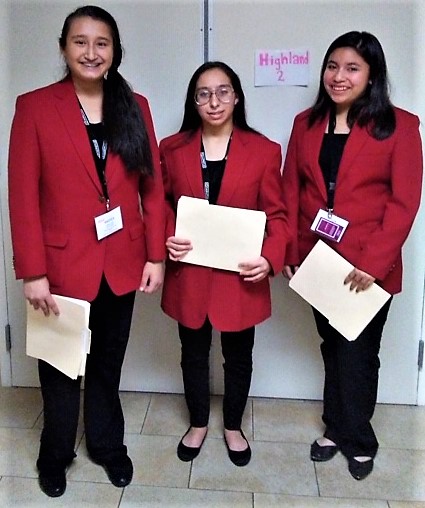